The Permian Basin is one of Chevron’s (CVX) primary growth areas, and the company has nearly doubled its resource base there in the last two years, to 16.2 billion barrels of oil equivalent (BOE). It successfully increased Permian oil production 34% in 2018 over 2017. Oil represents 52% of its Permian mix, natural gas liquids 21%, and natural gas 27%. The Permian makes up about 10% of Chevron’s worldwide production profile.

Chevron has economies of scale that are well-suited to shale’s current manufacturing model of operations; it has a low royalty rate relative to others; and its Australian liquefied natural gas (LNG) experience is of value as Chevron and others grapple with the large volumes of associated gas that co-produced from Permian oil wells. 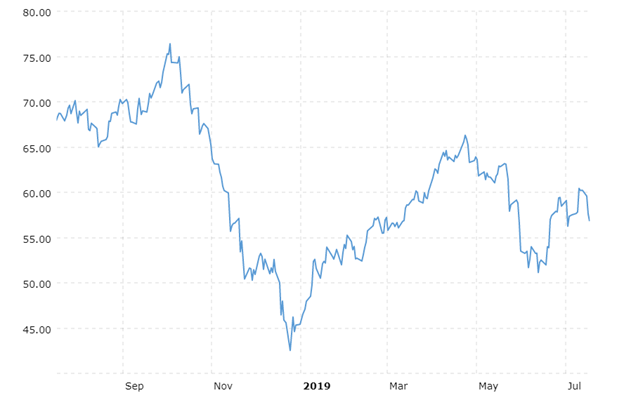 The Energy Information Administration (EIA) expects WTI prices will average$62/barrel for the second half of 2019 and $63/barrel for 2020. Illustrating the effect of cumulative volatility, the 5-95 confidence interval is $30-$100/barrel for December 2020. 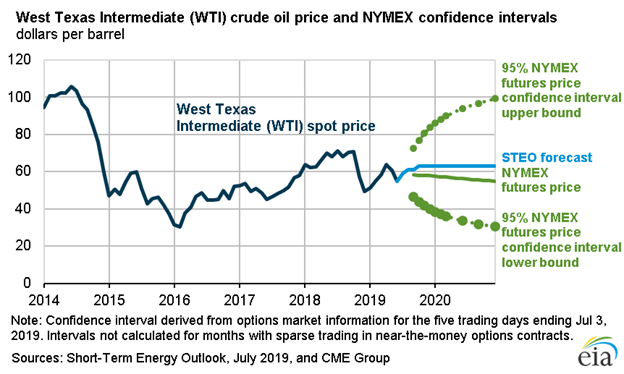 Current U.S. oil production for the week ending July 12, 2019 was 12.0 million barrels per day (BPD), down slightly from highs in the last few months of 12.3 million BPD. Shale oil production is said to be slowing due to less capital available to sustain drilling programs. For example, so far this year according to the Wall Street Journal’s Stephanie Yang quoting Dealogic, “North American energy producers have raised less than $400 million by selling new shares, versus $6.5 billion last year.”

August 2019 oil production from the Permian (West Texas-Eastern New Mexico) is projected at 4.2 million BPD, up from 3.1 million BPD last year and more oil than many entire countries produce. 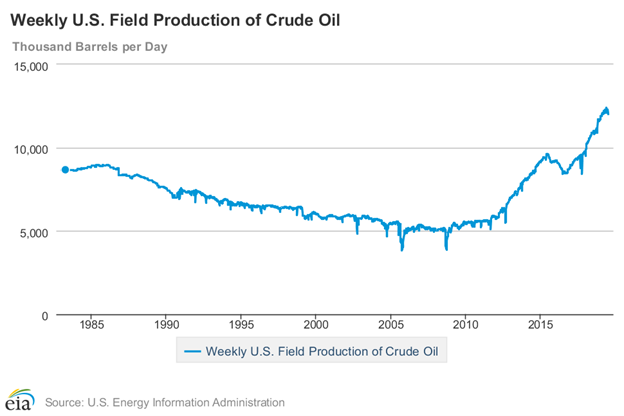 Chevron was founded 140 years ago, in 1879, and is today headquartered in San Ramon, California. The company employs 48,600 people full-time. 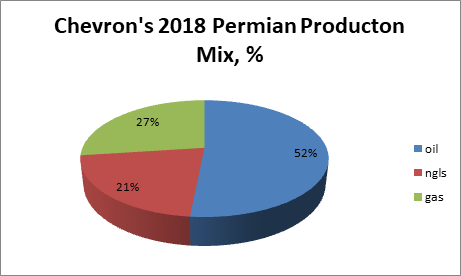 Competition extends throughout its business, from hiring executives and expert professionals, to competing for service contractors, to selling oil and gas.

The rapid upswing in Texas production has resulted in labor and material challenges, including trucking (and lack of highways), water, oil pipelines, gas pipelines, and low-even negative - prices for co-produced gas. Both oil and gas pipelines are being built; however, it will take a while to bring them on as operational problems must be solved.

Rebecca Elliott at the Wall Street Journal has just reported on gas pipeline company Williams’ (WMB) frustration with producers flaring 740 million cubic feet/day (MMCF/D) of Permian and Eagle Ford associated gas. Moreover, the Texas Railroad Commission has granted producers 27,000 (=100%) flaring exemptions in the last seven years. While 740 MMCF/D represents 0.8% of U.S. gas production of 88.4 BCF/D, according to Elliott’s sources, its value is $1.8 million/day and flaring generates greenhouse gas emissions equal to those of about five million cars driving for a day.

Producers have sought the exemptions because west and south Texas gas prices have been low or even negative but the unwanted gas is co-produced with much more valuable oil. 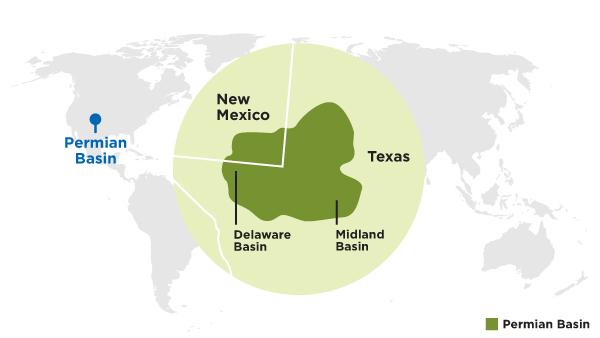 Chevron has a total of 2.2 million Permian acres. On an unrisked basis, its Permian resources are 16.2 billion BOE. Since the company owns the minerals outright in many places and its royalty rate is low in others, Chevron pays much less in royalties on a percentage, or per-barrel, basis than companies newer to the play.

The company was outbid by Occidental (OXY) for Anadarko, but had been prepared to pay $33 billion. Should Permian consolidation continue Chevron has proven it could readily be an acquirer. In the meantime, it will be drilling, with a planned 20 operated rigs and 7-10 non-operated joint venture rigs.

Because shale operations at this point in the development cycle lend themselves to a scaled-up manufacturing model, Chevron’s size and financial heft allow it to pursue a manufacturing model more easily than smaller competitors, especially since outside capital availability has tightened.

In the Permian, the company is executing on its goals of decreasing unit costs, increasing its well performance, and continuing to adopt best practices. It plans to be cash flow-positive in the Permian by 2020 and is aiming for production of 900,000 BOE/D by 2023.

Agreeing in the first quarter of 2019 and closing in the third quarter of 2019, Chevron is selling North Sea assets to Israel’s Delek Group subsidiary Ithaca Energy for $2 billion, progressing toward a goal of cutting $5-10 billion of less competitive assets in 2018-2020.

Along with the Permian, other areas of focus are deepwater Gulf of Mexico, Australia, and Kazakhstan.

Its trailing twelve-month return on assets is 3.5% with a return on equity of 9.0%.

At March 31, 2019, the company had $100.7 billion in liabilities and $256.8 billion in assets giving Chevron a liability-to-asset ratio of 39%. Its ratio of current assets divided by current liabilities is 1.12, just above the desirable minimum of 1.0.

The company’s beta is 0.80; this somewhat-subdued volatility relative to the overall market is in line with its status as a giant international energy company.

Overall, the company’s mean analyst rating is a 2.0-2.1, or “buy,” from the 24 analysts who follow it. Changes from March 2019 include four companies maintaining their rankings, and two initiations at “buy/overweight.”

As of March 30, 2019, the four largest institutional holders of Chevron’s stock, some of which represent index fund investments that match the overall market, were Vanguard (8.2%), Blackrock (6.7%), State Street (6.1%), and Wellington Management (2.1%).

The company’s book value per share at $81.40 is well under its market price, implying positive growth and profits sentiment.

With an enterprise value (EV) of $266 billion, its EV/EBITDA ratio is 8.0, below the preferred ratio of 10 or less and so suggesting a favorable price.

Potential investors should consider their oil price and general stock market expectations as the factors most likely to affect Chevron. Many producers can set the marginal price: the largest of these-Saudi Arabia and Russia-could decide not to adhere to their current production cuts, thus driving oil price down, along with the prices of U.S. oil producers.

Offsetting this is a slight decline in the upward trajectory of U.S. production, caused by reduced access to capital.

Still, oil demand growth from China and India is reduced, resulting in a relative excess of supply.

Should changes in Permian gas flaring exemptions occur, all Permian producers will be affected.

The recommendations that follow derive only from an analysis of Chevron’s Permian Basin operations. Some investors may want to do a wider-spectrum review.

Since the company is at a high point in its one-year price, bargain investors and those seeking capital appreciation may want to put Chevron on their watch lists.

Chevron’s size enables it to wait out any Permian price, drilling, or transport issues; its experience with selling LNG at Gorgon will be useful in selling co-produced Permian natural gas.

I recommend dividend investors include the company in the energy or blue chip portion of their portfolios . Favorable factors include the company’s 16.2 billion BOEs in the country’s largest, most economic oil basin; a top governance score; a recently-increased dividend of $4.76/share, or 3.8%; financial heft and low Permian royalty rates as relative competitive advantages; and its ability to execute profitably across several different energy types and locations.

I hope you enjoyed this piece. I run a Marketplace service called Econ-Based Energy Investing which features my best ideas from the energy space, a group of more than 400 public companies. I offer three different portfolios for your consideration, as well as weekly in-depth articles, including a mix of portfolio reviews and company-specific deep dives. I’m bringing my experience from decades in the industry to this service to help investors deal with the ups and down of the energy sector. Interested? Get started here with a two-week free trial.

Disclosure: I am/we are long CVX, EOG, FANG, WPX. I wrote this article myself, and it expresses my own opinions. I am not receiving compensation for it (other than from Seeking Alpha). I have no business relationship with any company whose stock is mentioned in this article.